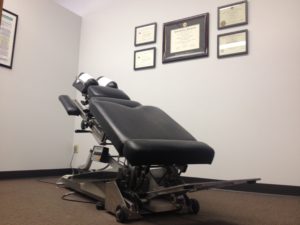 Whether it’s because of the cracking or popping sound, the positioning of their body during an adjustment, or seeing too many bad action movies, some people get anxious about traditional chiropractic adjustments.

And when patients are anxious during an adjustment, their muscles often tense up, and the chiropractor often has to apply more pressure to perform the adjustment as a result of those overactive muscles.

As chiropractors, we want to ensure our patients feel good about coming to see us. If you ever have any apprehension about getting adjusted, read on to learn more about the safety of traditional adjustments, as well as to learn about potential alternatives to these adjustments if you’re still not comfortable.

Want to make a chiropractor cringe, sigh, or roll their eyes?

Show them a scene in a movie where a character breaks someone’s neck with what seems like a flick of a wrist.

Scenes like these in movies lead some people to fear getting their neck adjusted by a chiropractor.

In reality, it takes about 1,000 to 1,200 foot pounds of force to break a neck. Your neck is actually designed to resist this type of force and to protect you. In fact, one reason this technique is used in movies and tv is that it is a safe method to use on a stuntman (on top of being much less expensive than a big explosion or gun battle!).

If you’re wondering, a chiropractic adjustment typically requires about 49 foot pounds of force.

In other words, an adjustment to the neck is not nearly as scary as the movies make it appear!

No, we’re not talking about the Rice Crispies mascots - though if it makes you feel more comfortable, we invite you to think of them during your adjustments!

Some people dislike the clicking, cracking, or popping sounds made by an adjustment.

Even so, some people just don't like the clicking, cracking, or popping sound made from an adjustment or even someone just casually cracking their knuckles.

For those individuals we offer chiropractic techniques that do not usually cause the audible noise associated with the adjustment and are just as effective.

We’ll go over those alternative adjustments next!

The first alternative method is Thompson Drops. Our adjusting tables are fitted with a mechanism called Thompson drops that can be used from the hips to the head.

So how do the Thompson drops work?

Because of the extra speed of the table dropping (hence the term “drops”), less force is needed to correct the misalignment and the noise of the table usually covers up any noise made by realigning the joint.

Drops are also a great alternative for those who are uncomfortable in the side-posture position sometimes used to adjust the lower back.

This might sound like the name of one of those bad action movies we referenced earlier, but it is actually another way to perform chiropractic adjustments.

An activator is a small, handheld, spring-loaded device.

It works on the same principle as the drop pieces in the table in that it creates speed through the spring-loaded instrument. Therefore, less force is needed to make an adjustment. The amount of force can be adjusted on the activator as needed for different individuals and different areas of the body that need to be adjusted.

Because the activator applies a low force that can be directed only into the tip of the instrument, it is also a good choice for adjusting infants with smaller anatomy.

Whatever your reasons may be for being anxious about getting adjusted, hopefully this cleared up any misconceptions or fears about chiropractic adjustments. Talk to Dr. Sara or Dr. Nick about the alternative forms of adjustment to find the right fit for you!

Additionally, here are a few other blogs you may be interested in:

What are Extremity Adjustments?